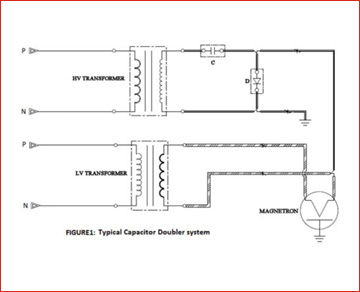 Heating is an essential process in domestic and industrial applications. There are multiple types of heating methods in which microwave heating is one of the recent discoveries.

Microwave heating is an efficient, economic, green and faster. Uniformity of heating is better than any other method.

Domestic and commercial microwave ovens are commonly fixed power supplies. Which mean power can either be zero or full power. These are available from 800w up to around 2000w. These ovens apply ON-OFF control to get variable power control. In ON-OFF control, keeping a constant time the power supply delivers full power for some amount of time while for remaining time, microwave generation is switched off. Amount of ON and OFF time vary depending upon the amount of power, keeping the total time (ON+OFF time) constant. These ovens use electrical wiring called doubler.

A different type of ovens are also available in which SMPS technology is used. These type of ovens are more compact and more efficient than doubler type, but relatively costlier. These are variable power supply ovens, in which power can be varied instantaneously.

Some ovens along with microwave, have feature of convection. These will have a heater and a convection fan to blow the hot air on to the food being heated. These mostly work on 2.45GHz frequency.

Industrial microwave power supplies are available from 800w to hundreds of kilo watts. Ovens are also available with hot air circulation to have more efficient heating along with microwave heating. 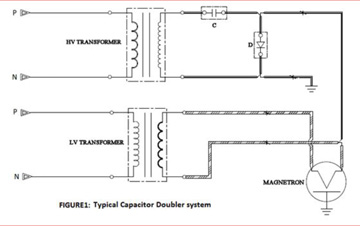 Doubler based ovens use voltage doubler also called as capacitor doubler. These power supplies have a step up transformer a capacitor and a diode. A basic schematic is shown below.

Doubler employs very less components which makes it more simpler and economic. But because there is no feedback loop to monitor the power delivered, system becomes less reliable. Doublers are used with microwave power supplies up to 1.5 to 2kilowatts of power.

Most of the domestic and commercial microwave ovens are fixed power, on-off type, capacitor doubler systems. 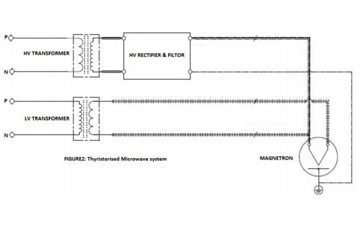 Thyristor/triac based ovens work on the principle of phase angle control. A tryristor/triac based power controller is used to control/regulate the AC power. This regulated AC power is fed to a step up transformer which increases the voltage to thousands of volts. This high voltage is then rectified and filtered. A basic schematic is as shown below.

SMPS power supplies have the advantage that size of the step up transformer decreases with increase in input AC voltage frequency. These are more efficient and compact than other two types. But complexity and cost involved are high. All the possible power values microwave ovens can be built with SMPS.

Domestic microwave ovens are meant to be used not more than 5 times a day, and commercial ovens can be used around 200 times a day. While a industrial microwave oven is meant to work continuously for 24X7 in an industrial environment where temperatures may rise up to 55 to 60 deg C.

Industrial ovens may have more than one magnetron to meet the requirement of higher power, which also contributes to better uniformity of heating.

Domestic ovens are constructed out of mild steel sheets to make it cheaper, while commercial and industrial ovens are made up of stainless steel. Industrial microwave ovens have outer body of from 3 to 10 mm depending upon the applications. Also the electrical components are over rated to work in harsh conditions of industry.

Industrial Microwave batch type furnace ‘Micro heat MH5814’ of oven cavity of 7150 cubic inches can be operated up to 1400 deg C. It has 4 magnetrons of 1.45kw each which make 5.8kw of microwave energy. Oven is made up of SS-304. It has 2 oven door interlocks for accidental opening detection, magnetron over temperature interlock for each magnetrons, and a power supply door interlock to avoid accidental electrocution while the system is operational. Proper insulation is made so that oven outer body temperature doesn’t go beyond RT+50 deg C(RT- Room Temperature) even when the sample is at 1400 deg C.

There is gas and vacuum provisions to conduct the experiments in vacuum, argon, hydrogen, nitrogen or any other gas environments.

Contact less IR pyrometer is used to measure the sample temperature. Microwave power can be controlled either manually in manual mode by a potentiometer or by a PID/PLC/PC in auto mode. Sample temperature, individual microwave power, and mode of operation can be monitored by a PC by data acquisition system.

Microwave heating technology is a new to the world, at least to the third wold. This technology is vastly used in US and Europe and almost every house has a domestic microwave oven. It is also used by many industries in these countries. People are to be educated about its benefits in domestic and industrial sector. Higher initial cost is the hurdle for it’s popularity. But once bought it can save lot of money and time.